You are here: Home / Unblock / How to Watch Death in Paradise Season 9 Online

On a small island named Saint-Marie, plenty is going on in the case of murders. Since 2011, the hit show has seen season after season come and go, and along the way, there has been a change of the detectives investigating the murders in the comedy, crime drama.

Many fans are keen to go back over full episodes of the Death in Paradise TV series, yet it is hard to find where it is located.

Our guide shows where to find the show, and how to watch Danny John Jules and other colourful characters in Death in Paradise season 9, and every other episode from the smash hit show, to watch online. 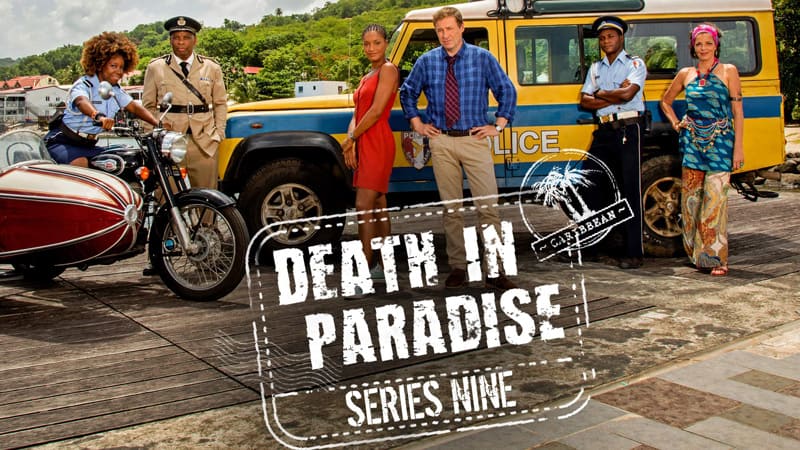 What Happened in Death in Paradise?

The comedy crime drama is a British-French collaboration created by Robert Thorogood. The small island has seen numerous detectives come and go.

Faces that fill these rolls have been:

It was Death in Paradise season 9 episode 5 fans saw the arrival of the latest inspector. His first call of duty was to investigate an apparent suicide.

Season 9 Episode 8 ‘Now you see him, Now you don't' and was the final episode in the season. It showed a darker side to the show, and maybe things are turning when season 10 Death in Paradise rears its head.

Danny John Jules was a mainstay and, as of yet, has starred in more episodes than any of the other cast. Unfortunately, he has since departed, and fans will need to wait and see who can keep going on the deadly paradise island.

Where to Watch Death in Paradise

For fans of the show, it is good news when it comes to Death in Paradise streaming. It is easily accessible from any country using a VPN, and following a few simple instructions, you can watch online free.

The show is currently in one country, United Kingdom, and in its entirety on the BBC. Because of this, all users need to do is select a premium VPN that offers fast streaming speeds from the United Kingdom, and can bypass the geo-restrictions, and VPN usage set by the BBC iPlayer.

Once you do this, it is easy to watch Death in Paradise Season 8 or 9, as it is to go back to the very first episode.

The first thing users need to do is sign up and create an account for the BBC.

The site will ask if you are a holder of a BBC TV license. Be sure to click the “Yes” option. If you try to watch Season 9 online, the site displays a message “BBC iPlayer only works in the UK. Sorry, it's due to rights issues.”

Now, you need your VPN.

It is easy to access the iPlayer if you have the right VPN in place. It appears simple, yet there are stringent checks in place as you find with Netflix in the United States.

Luckily, the recommendations of VPN here bypass these restrictions, so you can access any streaming service you wish from around the globe.

With over 3,000 servers across 94 countries, users are assured they have the best connections.

ExpressVPN is the industry leader for streaming because of unblocking streaming restrictions and delivering the fastest streaming speeds from all the optimized servers that fill their vast network.

Users can find it holds the best record for iPlayer and Netflix access, and in the case of
issues, it is easy to select servers at a city level.

It runs on multiple devices, including Android and iOS, Mac and PC, Linux, and routers. There are also browser extensions for Chrome and Firefox. Users can connect five devices at once.

Installing it on routers lets users have unlimited connections from one connection, with unlimited bandwidth, and unlimited server switching.

Get ExpressVPN and SAVE 49%

The VPN offers the best encryption for user privacy and security. It has a built in kill switch; there are no IP or DNS leaks while using the service.

Finally, the VPN has the best 24/7 live chat in case of issues, and an industry leading 30-day money-back guarantee.

PureVPN operates in a high number of countries, 140 of which are over 2,000 servers. While the number of servers may not be as high as that of some VPN providers. It does a decent job of avoiding geographic restrictions and delivering high speeds.

It now allows you to connect 10 simultaneous devices at once, and comes with malware protection and an ad blocker, along with a split tunnel. PureVPN also offers an off switch, and customer support is available 24/7.

You'll find that for added privacy, PureVPN is one of the few VPNs to be located out of any of the 5, 9, or 14 eye jurisdiction territories.

Get PureVPN and SAVE 40%

Support for devices is extensive and covers Windows, Mac, Android, and iOS, Linux with extensions for Chrome and Firefox, among others. It also offers a free 7-day trial along with a 31-day money-back guarantee.

Both of these VPN's are ideal, yet to watch Death in Paradise Season 9, ExpressVPN pulls ahead because it is the best VPN for New Zealand and other remote regions.

If you wish to test all the features and performance, you can sign up in a matter of minutes, and as soon as you change a server to the UK, you can make use of the money-back guarantee and watch Death in Paradise online for free.